One more post to feed the Discount Thesis beast: SHLD - Sears and K-Mart

Does the combination of Sears and K-Mart have what it takes to take on Wal-Mart and Target? Is it synergy or stupidity? Let's look at some pros and cons I've found, but first, some important personal anecdotes:

My Dad was a mall developer for many years. When I was quite wee, he worked on developing Deptford Mall, five minutes from where I grew up in South Jersey. He negotiated leases and put together a diverse selection of retailers, or at least as far as his personal tastes would allow. (He overrepresented shoe stores in the retail mix.) He was proud of the mall, and loved taking me, parking in one of the special reserved spaces, and roaming the corridors like it was his.

I recall some of his comments about the then anchor stores at Deptford. He seemed to like the Bamberger's, especially the kitchen goods gallery and its array of gadgets. He was happy to have a classy John Wanamaker's outpost, even though that prevented the mall from getting a Strawbridge and Clothier location. (I remember there was a feud between these then-family-owned Philadelphia department stores; neither company would have a store at a mall that housed the other. I think that's why the Cherry Hill and Moorestown Malls exist within a few miles of each other, as well as the proximity of Echelon Mall to Deptford.)

And then there was the Sears.

Sears was quite unlike the other two department stores. Part of the parking lot was taken up by a shed of sorts that emanated smells of fertilizer and mulch. The store itself was a downscale amalgam of hardware store and second-rate clothing departments. It was also at the end of the mall where the Thom McAn, video arcade, and smurf emporium all resided. Most of the mall reflected a hopeful, optimistic feeling that Dumpford, er Deptford was developing. Soon, the trailer parks and turkey farms in the surrounding area would soon be history. The Sears end of the mall reflected Deptford's then current state of affairs.

We'd go to Sears for the occasional Craftsman tool and little else.

Years later, my Mom had re-entered the workforce, and took a job at a brand-new Sears that opened at the Echelon Mall around '98 or '99. In 1999, Echelon mall had four (4!) middling department stores (Boscov's, JC Penney's, Strawbridge's, and Sears), an inconvenient location far from highways, and a tumbling vacancy rate. Surprise, surprise, the store closed in 2001. (It wasn't my Mom's fault; her sales skills probably kept the place open as long as it was.)

Summing it up in an alliterative fashion, Sears sucks.

So who likes Sears? Jim Cramer, that's who:
Cramer also said Sears' (SHLD:Nasdaq) "gigunda buyback" is the first of many to come, and he "wants you in Sears."

Cramer doesn't talk up SHLD because it's a wonderful synergy of two dying retailers, K-Mart and Sears. He loves Sears because he want to make sweet sloppy love to Eddie Lampert. Cramer's hoping he's found the next Berkshire Hathaway. He's been trying to convince Mad Money viewers to buy this story, even to go so far as to convince those low on funds to buy a single share of SHLD.

That's a bit rich to me. And it's a bit rich according to some others:
Sears-Kmart and Core Competencies (SHLD)
I never really understood the whole Sears-KMart thing, writes Greg
Newton. Two wrongs never make a right and all that - but it starts to
make sense now that Ed Lampert, principal of ESL Investments and
chairman and largest shareholder of Sears Holding (SHLD), will take
over the marketing, merchandising, design, and on-line businesses of
Sears Holdings, including its Lands' End unit, to ensure that these
initiatives are clearly focused on responding to customer needs.

One of the great investors? Turns out that all he really wanted was to
be a buyer for a fourth-rate department store chain. Next thing you
know, Paul Jones is going to show up behind the counter at McDonalds -
if such things are allowed in Greenwich.

Positions: None. But with the lack of asset sales to date undermining
the SHLD bull case, dismal second quarter results announced yesterday,
and the great investor supervising photoshoots for another damned
Land's End catalog, my short trigger finger is getting itchy. I need
to find that Traders Anonymous phone number…

And how about Jeff Matthews' take:

As for one that doesn't, check out your local K-Mart.

This particular "Big K" is off Route One, in a C+ location next to an Ocean State Job Lot, a Dollar Tree and a Fashion Bug, and it looks a lot better than it looked during the the K-Mart Chapter 11 when the vendors weren't shipping: the shelves are full, the signs are cheery, the lighting is good and the floors are clean.

And that's about it.

"Big K" had that curiously soul-less feel of a decent-looking place with no particular franchise, nothing driving people in and little to keep them there. One ancient clerk moved slowly around the racetrack, putting up signage from a shopping cart when he wasn't stopping to chat with other clerks. A few customers lurked in the aisles, but the only crowd was at the service desk.

I then drove a few miles down Route One to the nearest Wal-Mart, which is in an A+ location next to a supermarket and a Home Depot. It was a typical Wal-Mart, bustling even at 11:30 on a Wednesday morning. The demographics of the shoppers were probably thirty years younger than the "Big K," with mothers dragging children through the apparel section, kids roaming the DVD aisles and men in the tool area. Overall, it had the energy of a store doing a lot of business.

Now, Eddie Lampert is smarter, and richer, than 99.9% of the money managers on the planet. He found value in AutoZone and Sears and K-Mart, and extracted billions. A couple of other big investments didn't work out so well, but that's still a remarkable batting average for anyone in any line of work—and right up there with his role model, Warren Buffett.

But people forget that the original Berkshire Hathaway—the New England textile company Buffett acquired and turned into the conglomerate we all know and admire—failed.

Even Warren Buffett couldn't make a New England-based textile company successful in a world of cheap southern mills and, later, offshore producers; so he liquidated that business, put the money into insurance, and used the float from the insurance business to buy high-return businesses with "moats," as he calls their competitive advantages.

I have no doubt Sears Holdings Corp will be an even more successful investment vehicle for Eddie Lampert than it already has been.

But in its base business, with Wal-Mart adding more sales every two years than the combined annual sales of Sears and K-Mart together, I also have no doubt that whatever Sears Holdings Corp is making money at twenty years from now, it will not be making money from its motley collection of stores without billions of dollars of newly invested capital.

Yes, I know the "story" of Sears Holdings—just shut down a few hundred more lousy locations, start selling Sears appliances in the K-Mart locations, and get store productivity up to the level of Target. Voila! The incremental EBITDA and earnings are mind-boggling.

But there are no moats around those Sears stores and K-Mart stores with their lousy merchandising and old clerks and the ratty fixtures and 1980's-era technology—only streets leading to better-looking, better-run, lower-priced Wal-Marts and Targets and Costcos and Sam's Clubs.

And to get the customers back will require more than bright signs and Kenmore dishwashers.

From what I saw, the score right now stands at Wal-Mart 9, Sears Holdings Corp 2.

That was a pretty convincing anecdote-rich analysis against further consideration of SHLD (but a vote in favor of WMT).

Now for the piece de resistance, the topper, the nail in the coffin, the cliche to end all cliches against SHLD, from the New York Times:

By JEFF BAILEY
CHICAGO, Sept. 8 - Edward S. Lampert, the billionaire who bought Kmart
when it was in bankruptcy and then used it to buy Sears, Roebuck, put
himself in charge of creative decision making on Thursday, taking a
measure of personal responsibility for lifting two retailers out of a
long sales slump.
...
Kmart and Sears were weakened in recent years due to uninspired
merchandising, squeezed between the fierce discounting of Wal-Mart and
Target and more fashionable offerings at department stores and
specialty retailers.

A person familiar with Mr. Lampert's thinking, who declined to be
named because Sears keeps tight control of all disclosures about its
business, said the financier believes there is a shortage of talented
merchants in the industry. "This is a work in progress," the person
said. "It's going to be a bumpy ride." But he noted that Kmart's sales
have pulled out of a nosedive under Mr. Lampert and that both chains
are also forsaking mere sales growth through discounting.

Mr. Lampert personally received compensation of more than $1 billion
last year, according to an estimate by Institutional Investor
magazine, in large part due to the big run-up in the value of Kmart
shares held by his ESL Investments fund. But the prospect of the
financier now overseeing merchants who make decisions on fabrics,
colors and other fashion elements disturbs Mr. Loeb, the retailing
consultant.
"That's scary," he said. "He's a terrific financial person. But he
doesn't necessarily know the details of merchandising. Every company
needs a strong merchant at the top." 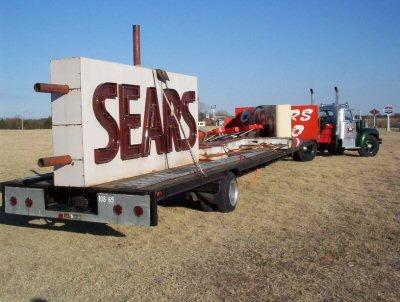 It's now 2006 and you've been proven wrong. SHLD is up big from the time your comments were written. SHLD is a real estate business. when Lampert purchased KMart out of bankruptcy he immediately sold 68 Kmart buildings to Home Depot and received $800 for them. He still owns over 1200 Buildings. Don't count Fast Eddy out.

Anybody here is interested in getting a FREE MC DONALD'S GIFTCARD?