That's a quote from the Jones Soda CEO, Peter van Stolk. If you look carefully at the label to the left, you'll see it's a bottle of smoked salmon soda (as opposed to regular salmon soda, and diet salmon soda with Splenda).

I think this is hilarious. It's also a brilliant bit of marketing that gets people talking, and apparently, blogging about a company. A funny CEO? A cool company? Hmm.

Fark.com brought the
salmon soda story to my attention:

Jones Soda, the Seattle company that scored a hit during the last two holiday seasons with its turkey and gravy-flavoured sodas, said it is offering the orange-hued fish-flavoured drink this year in a nod to the Pacific Northwest's salmon catch.

"When you smell it, it's got that smoked salmon aroma," said Peter van Stolk, chief executive of Jones Soda.

The salmon-flavoured soda will be offered as part of a $13 "regional holiday pack" that also includes other unusual sodas such as turkey & gravy, corn on the cob, broccoli casserole and pecan pie.

While those five bottles will be offered locally, Jones Soda is also selling its similarly-priced "holiday pack" of turkey and gravy, wild herb stuffing, brussel sprouts, cranberry and pumpkin pie sodas across the country.

Thanksgiving, a U.S. holiday that falls on the fourth Thursday of November, typically features a dinner with turkey, gravy and other condiments.

Van Stolk, who built his Seattle-based soda company by selling traditional sodas as well as exotic flavours such as green apple, bubblegum and crushed melon, said that "the most important thing (about Jones Soda) is that we can laugh at ourselves."

Asked whether he liked his new salmon soda, van Stolk said: "I cannot finish a bottle, I just can't." 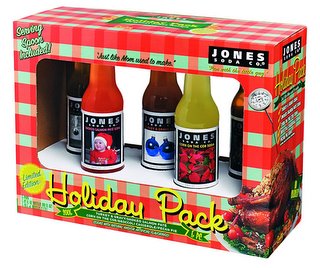 You know who is selling this holiday pack across the country? The cool kid of discount retailers, Target. I learned this from trudging through the comments section on Fark. Cramer also
positively noted the JSDA/TGT connection back on August 25:

But here's Mr. Consistency himself just two weeks before, on August 8:

What is your take on Jones Soda (JSDA:OTC BB - news - research)?

James J. Cramer: Jones Soda has a deal with Starbucks and Target, but its high cost of growth is taking a toll on the bottom line. I like the long-term trends, but until I see this beverage play improve its operating execution, I would rather own Pepsi (PEP:NYSE - news - research).

Cramer's hedging his bets, as he should, since JSDA is a risky speculative stock trading under ten dollars OTC.

So I turned to a value investing blog I've recently discovered, called
Cheap Stocks. And to give credit where it's due, Cheap Stocks' editor, Clyde Milton, and his uncharacteristic analysis of JSDA, prompted me to write this post. Let's look at most of the details:

This is not the typical company we research here at Cheap Stocks. We are not oriented toward growth stocks; we wish were, but we just are not wired that way. We gravitate toward deep value plays, and Jones is far from deep value. So why dedicate valuable Cheap Stocks real estate toward a company trading at more than 100X earnings? Because this company reminds us our greatest investing mistake, Hansen(Ticker: HANS, $67.39).
...
Jones Soda Co sells it sodas (under the Jones Soda Co. and Jones Naturals labels), teas and energy drinks in 41 states, and Canada. You may have seen there distinctive looking bottles sold in supermarkets, at premium prices (in my eyes, anyway) and other stores, these feature interesting flavors, and ever changing labels, submitted by consumers. The company has also made a name for itself at Thanksgiving, selling a soda assortment that includes such flavors as turkey and gravy, and mashed potato (no joke, check it out on their website). I’ve also noticed a growing presence in Target Stores, where Jones sells 12 packs at somewhat inexpensive prices. Inroads into a major chain such as Target make this an intriguing story.

The Fundamentals
It ain’t cheap. There’s no other way to say it. At about 140 times trailing 12 month EPS, 2.8 times sales, and 19 times book value, this company should not be within 10 feet of the words “Cheap Stocks”. But, however, we at Cheap Stocks are warming up to the idea of paying up for rapid growth in certain cases, and this company may fit the bill…..We have to at least be open to the possibility

The company does not have much to speak of in the way of assets ($9.7 million in total assets, $303 thousand in cash) nor does it carry much debt either ($116 thousand in LT debt). This explains the high price to book ratio, but also the company’s very high returns on capital and equity (more than 60% for each).

The Risks
Trading at such high multiples (to nearly everything imaginable) it appears that there is a great deal of growth priced into the stock. Still, trading below $5, the stock well off it’s high of about $8. While we are impressed by the company’s exposure in Target, we believe that the agreement expires in 2006, and are not aware of renewal prospects. Finally, the beverage market is extremely competitive, shelf space is difficult to secure, and margins are typically low.

Conclusion
While we don’t currently own Jones, we’ll be following the story, and perhaps looking for an entry point. A continued presence in Target, continued innovation in flavors and packaging, and growing brand recognition would all be pluses for this company. We’d imagine a great deal of price volatility moving forward. Finally, it is conceivable that ultimately, a bigger player takes Jones out.

Note the boldfaced quote. Milton is acknowledging that investing with a single philosophy has its (financial) shortcomings. I worry that he is regretting his unrealized Hansen gains, and trying to make up for it by backing another longshot in the soda business. But I appreciate his rigorous analysis that evaluates the negatives and the risks.

Fool.com weighed in with some insight back in September. Some excerpts:

You see, caramel apple soda is a staple in every kid's diet these days -- or so it seems when strolling through a Target (NYSE: TGT) store these days.

The Halloween cans are an exclusive deal with Target. It follows the more conventional canned soda deal with Target that finds 12-ounce cans of flavors like cream soda or berry lemonade. Still, most sippers don't associate Jones with cans. It's the company's glass bottles with user-submitted photographs on the labels that generate most of the company's retail reach.

Jones' colorful bottled sodas can be found at select supermarket chains, as well as at your local Starbucks (Nasdaq: SBUX), Barnes & Noble (NYSE: BKS), or Panera Bread Company (Nasdaq: PNRA) location. It's a pretty impressive span for a tiny Canadian company out to compete against pop stars like Motley Fool Inside Value pick Coke (NYSE: KO) and Pepsi (NYSE: PEP).

Then again, it's that alternative beverage positioning and its offbeat flavors like Blue Bubblegum that have allowed the company to grow in the shadows. Last year, Jones Soda's profits tripled to $0.06 a share on a 37% spike in sales. Things haven't gone as well this year, with sales growing by just 20% and the company posting a $0.01-per-share deficit through the end of June.

That likely explains the wild ride that Jones Soda has provided for its investors. When I first wrote about the company back in March, shares could have been had for just $4 apiece. By early June, the stock had nearly doubled. It has since fallen back to roughly $5.

The prospects are promising as Jones Soda expands into energy drinks, juices, and even frozen pops. With its relationship with Target expanding (thanks to the new Halloween lines) and chains like Starbucks and Panera continuing to grow, Jones Soda should have little problem growing the top line. Getting margins back in line so that the company could continue to build on last year's profitability has posed the more serious challenge.

The variety and limited-time availability of holiday editions generates consumer excitement. JSDA getting its products in other top-notch retailers like Panera Bread is attractive. I'm excited enough to want to schlep to the Brooklyn Target to pick up the holiday pack. Especially for the turkey soda.

Posted by WershovenistPig at 10:20 AM

As for Clyde Milton trying to make up for his Hansen "mistake" by piling into Jones, Don't worry. When he purchased Hansen, it was much more profitable than Jones, albeit slower growing on the topline. Thanks for picking up the post. CM from Cheap Stocks

Cool article you got here. It would be great to read a bit more concerning this matter.
By the way look at the design I've made myself Overnight escort

Thanks for sharing such a nice blog.