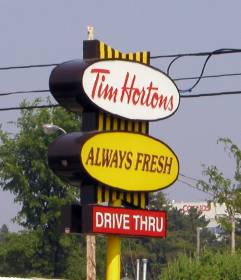 You may recall in a recent post on Joel Greenblatt's old book, "You Can Be A Stock Market Genius", that spinoff companies' returns beat the S&P 500 by a considerable margin. You also may remember that the parent companies beat the S&P as well.

At the time, I was excited to read news of McDonald's spinning off its winning Mexican chain, Chipotle. While that spin-off is in the works, investors are still pressuring MCD to sell off its corporate-owned stores and become more like a REIT.

A few days ago, I read on Fark that Wendy's investors have successfully pressured my favorite fast-food establishment to spin off its own fast-growing chain, Tim Hortons.

NEW YORK (Reuters) - Wendy's International Inc. filed for a $600 million initial public offering of its Tim Hortons coffee shop chain Thursday and said it could not back its 2005 earnings forecast due to several one-time items, including a fourth-quarter charge for store closings.

Wendy's (Research), the No. 3 U.S. burger chain behind McDonald's Corp. (Research) and Burger King Corp., said it will take $79 million to $95 million in charges for closing some Wendy's, Baja Fresh and Tim Hortons restaurants as well as asset impairment.

A currency hedge is also expected to affect the company's fourth-quarter tax rate, and Wendy's said it was therefore unable to affirm its earnings outlook for the year.

Wendy's will record gains of $60 million to $70 million for selling about 200 of its hamburger restaurants to franchisees and third parties.

Dublin, Ohio-based Wendy's has been struggling to reverse sluggish sales at its namesake restaurants for more than a year. In July, the company said it would spin off fast-growing Tim Hortons so it could focus on the battle of its flagship brand against a revitalized McDonald's.

"We're very impressed with the reported numbers for the business, we think it's a great company and we think there's going to be a glowing reception," he said at a seminar run by The Daily Deal newspaper in New York on Thursday.

He added that the Wendy's developments would be a boost to his campaign to have McDonald's spin off 65 percent of its company-owned restaurants in an IPO.

"This is a company that is not capitalized correctly," Ackman said, adding that McDonald's makes the lion's share of its money through real estate and franchising fees, not through food sales.

The expected price range and the number of shares to be offered in the Tim Hortons IPO have not been set. The offering will be underwritten by Goldman, Sachs & Co. and RBC Capital Markets, according to the filing with the Securities and Exchange Commission. 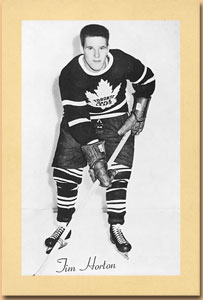 Tim Hortons is ubiquitous in Canada. The chain was founded by its namesake, the late Toronto Maple Leaf pictured to the left. Of the 2842 locations, 2564 are north of the border, with almost 1400 locations in Ontario alone. New Brunswick, a much smaller province, has 122 locations. Putting those numbers in perspective, there are 11.4M residents of Ontario and 730K residents of New Brunswick. So there is approximately one Tim Hortons in Ontario for every 8150 people. In New Brunswick, one location for every 6000 people.

There are almost twice as many Tim Hortons locations in Canada as there are McDonald's.

Growth in Canada? Hmm. I'm not lovin' it.

But how about right here in the United States? Out of the currrent 278 locations, 30 are in Rhode Island, while New York has 71 (though none in NYC) and 73 in Michigan. My calculations show that each Tim Hortons in RI serves 35K people, while in Michigan, it's one Tim Hortons per 135K people. New York, one for every 268K people. Now there is the opportunity for expansion.

Hints of the expansion plans are right there on the franchise section of the Tim Horton's website:

As of July 2005, there are over 260 Tim Hortons locations in the United States. These are situated in Michigan, Ohio, New York, West Virginia, Kentucky, Maine, Rhode Island, Connecticut, Massachusetts and Pennsylvania. Future expansion and opportunities will continue in these markets for the next several years.

Certain states regulate the offer and sale of franchises. We have not applied for registration (or exemption from registration) under the laws of Hawaii, Maryland, Nebraska, North Dakota, South Dakota, and Utah. If you are a resident of one of these states, we will not offer a franchise to you at this time.

We're looking at possible expansion in New England, parts of the Rust Belt, and into the South, while ignoring for now a bunch of thinly-populated states (save for Maryland).

I'm getting excited about maple-frosted donuts and coffee. And I may not have to wait 'til my next trip to Montreal to get some sweet satisfaction.

So should I wait for the THI offering, or buy into WEN right now? Or perhaps do both? Or should I continue to wait for the McDonald's spin-off of Chipotle?

Here are some quick comparison numbers from SmartMoney and Morningstar between WEN and MCD:

WEN is near its 52-week high. The stock has done really well this year, even with its lagging fundamentals. I appreciate the hedge fund pressure to extract shareholder value. I cannot make a fundamental case for buying WEN. However, this activist-investor pressure, plus Greenblatt's point that parent companies beat market returns, is keeping me interested in WEN. I will keep abreast of the THI IPO as well.

I am also still very much interested in the McDonald's/Chipotle story. There could be some fast returns in fast food.
Posted by WershovenistPig at 4:45 AM