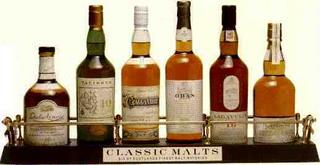 Just back from Scotland, where I did my best to neglect the Pig. I visited Edinburgh and Glasgow, with a tour of the Highlands in between. What does a tourist do in the Highlands, apart from gawk at the ubiquitous sheep and bison-like brown cows? Visit Scotch whisky distilleries.

Walking by huge copper pot stills and oak vats, I felt as though I was in an oversized chem lab, but instead of precipitating out para-dichloro-benzene, the workers here were making spirits, sweet spirits. As you moved along the whisky-making process, the scents, or really, smells dominated my senses. Bright beery yeast in one room, alcohol in another, and finally the cool mustiness of the storage cellars where casks of ageing whisky lie dormant, slowly absorbing the flavors of the former sherry casks.

My tastes run the spectrum of whiskies, across Scottish geography. My preferences also cross various distillery parent companies. The lighter Speyside whiskies I enjoy, Macallan and Glenfiddich, are owned by the Edrington Group and William Grant & Sons. Edrington also owns the vile Cutty Sark, a.k.a. "The Shark" for its unwelcome bite. Glenlivet is pretty good, and is owned by Chivas Brothers, now a subsidiary of Pernod Ricard. Moving westard and peatier, Oban and Lagavulin are both excellent and operated by Diageo. LVMH Moët Hennessy Louis Vuitton owns Glenmorangie, a light single malt often mentioned as one favored among women whisky drinkers.

Investing in most of these companies is more difficult than finding a bottle of Glenfiddich's 21-year-old Havana Reserve here in the US. Edrington and William Grant are privately-held. LVMH and Pernod Ricard are public... in France.

That leaves Diageo, which happens to trade on the NYSE as DEO. Diageo smartly markets its diverse range of single malts under the mark "Classic Malts of Scotland" pictured atop this post. Diageo also owns unrelated booze that's quite popular in my home: Guinness, Tanqueray, and Baileys.

I worked through a quick discounted free cash flow model for DEO from my vacation reading, using the following figures:

Looking at some data from Smartmoney.com, DEO has a PEG of 1.32, a bit lower than its competition. It also sports a dividend yield of 3.81%. That seems a generous number for this industry.

Now I don't feel so bad that my only Scotch investing option is Diageo.
Posted by WershovenistPig at 12:30 PM